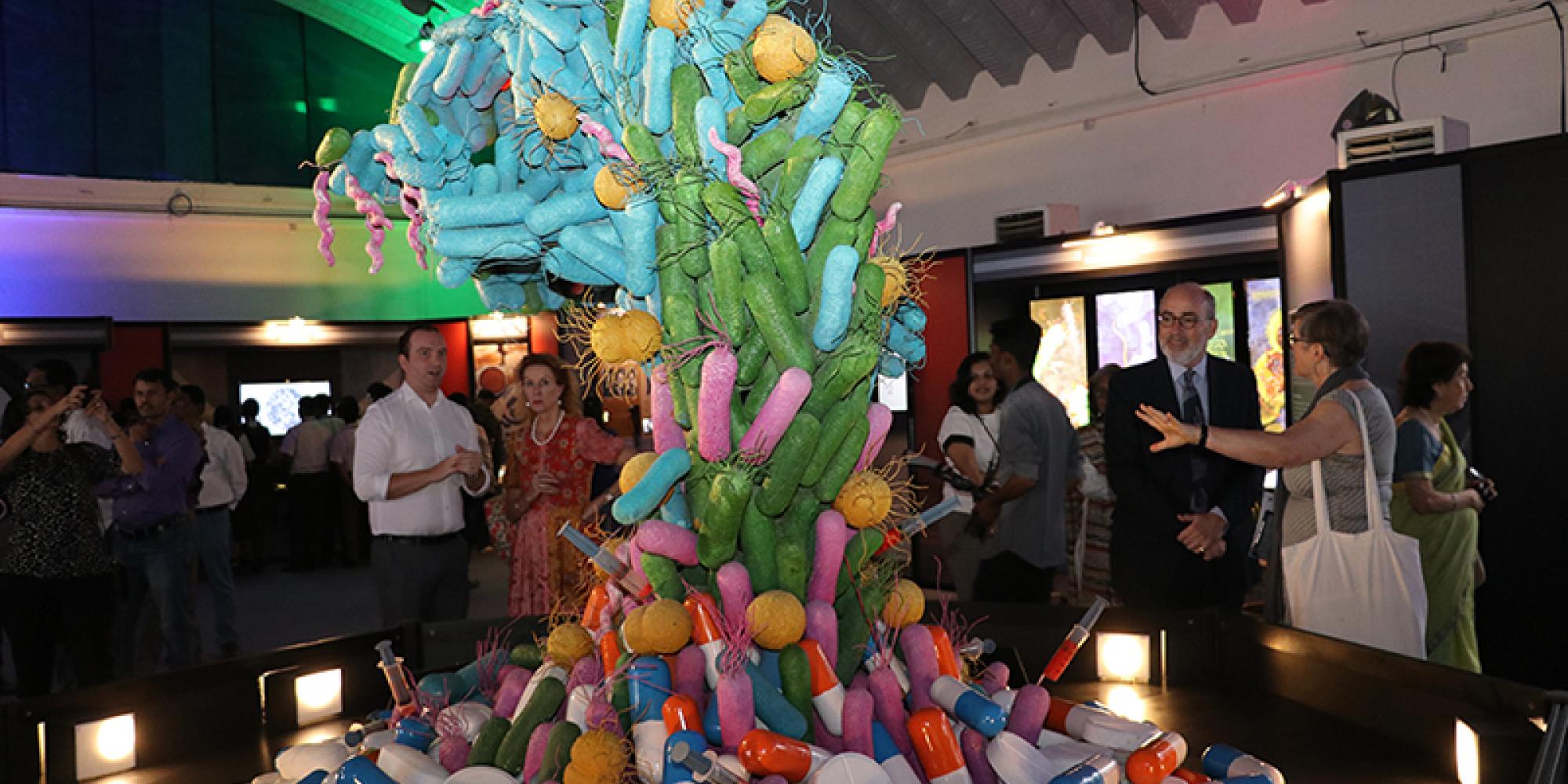 Superbugs Exhibition and the Saga of raise and fall of Antibiotics 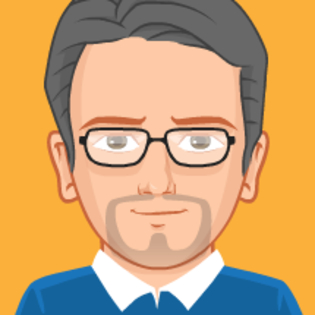 30 December 2019
Shivaprasad Khened,
Director, Nehru Science Centre, Mumbai
The story of the ‘accidental’ discovery of penicillin has been frequently told and this story has transcended across countries. Even in India, most of us, including the school children, are familiar with the story of Alexander Fleming and his serendipitous discovery of penicillin. The accidental discovery of Penicillin won Fleming and two other scientists, Ernst Boris Chain and Sir Howard Walter Florey, the coveted Nobel Prize in Physiology or Medicine for the year 1945,  "for their discovery of penicillin and its curative effect in various infectious diseases."  Our understanding that infectious diseases are caused by microbes - bacteria and other microorganisms - came about thanks to the research work of Louis Pasteur and Robert Koch, who explained the nature of the infectious diseases and the connection that exists between them and the disease-causing bacteria and other microorganisms. This profound understanding opened research opportunities for scientists to advance medicine, which could help in the prevention and treatment of an important group of diseases that are caused by bacteria and other microorganisms.
Penicillin and other antibiotics and vaccines developed over the past few decades, which have saved millions of lives, owe their genesis to the fundamental understanding of the nature of the microbial diseases. The story of the accidental discovery of the penicillin (antibiotics) and its benefits for humankind is now pervasive. But then the saga of antibiotics including how scientists and engineers toiled hard to mass-produce this wonder discovery - penicillin - is less known. What is even lesser-known part of the antibiotics story is that, Alexander Fleming had also predicted the rise of Superbugs - microbes, which will, over time, become immune to antibiotics and may lead to fall of the wonder drug, penicillin (antibiotics). In a talk recorded by the BBC in 1945, Fleming himself had highlighted the dangers of improper use of penicillin. He had said, ‘If the dose is too small, the microbes will not be killed and there is a danger that they will be educated to resist penicillin’. He added, ‘we might then have someone who has a simple sore throat treating himself inadequately with penicillin and educating his microbes to resist the drug. These educated microbes could then be passed on to his best friend who might get pneumonia, for which…penicillin would do no good’. Fleming added, in this case, ‘the first man through thoughtless use of penicillin would be morally responsible for the death of his best friend’. Fleming’s prophetic statement is turning out to be true in modern days. 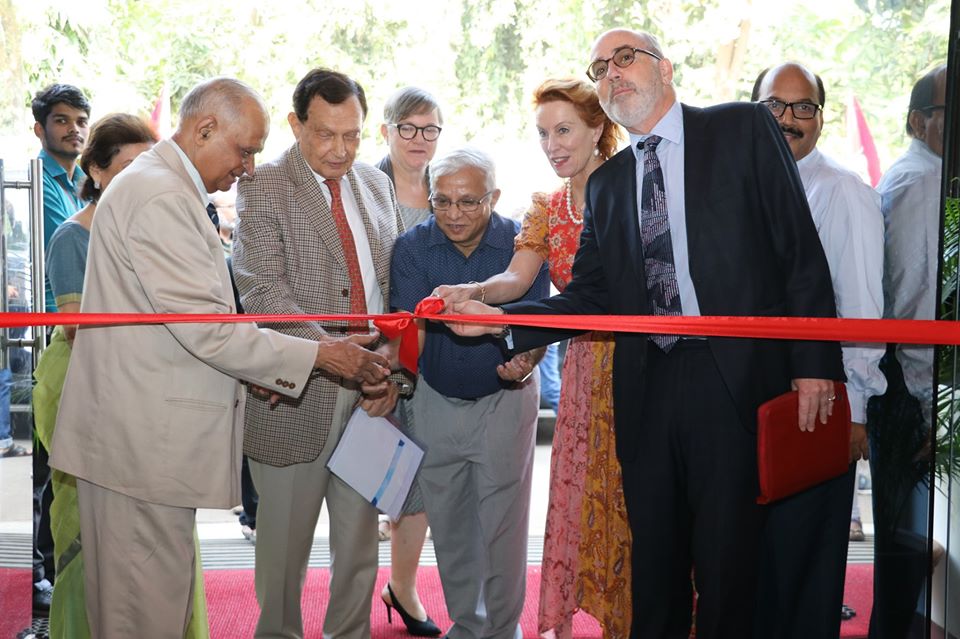 Fleming’s statement summarises the significance of what has now become a global health menace - The Antimicrobial and Antibacterial Resistance - AMR and ABR - which may eventually lead to disastrous consequences and make penicillin - the life-saving drug - completely ineffective and helpless. It is, therefore, time for all of us, the global community, to stand unitedly in addressing this global menace and for this, the first step is to create a much-needed awareness among the general public about this problem. It is in recognition of this necessity that an exhibition ‘Superbugs: The End of Antibiotics?’ has been curated and developed jointly by the National Council of Science Museums (NCSM), Ministry of Culture, Government of India, the Science Museum, Group, London, with support from the Wellcome Trust (UK) and the Indian Council of Medical Research (ICMR). This exhibition was opened by two distinguished scientists Padma Vibhushan, Prof Man Mohan Sharma, Emeritus Professor,  Institute of Chemical Technology ( formerly UDCT) and eminent Physician, Padma Bhushan, Dr Farukh Udwadia in the presence of Mr. Crispin Simon, British Deputy High Commissioner for Western India and Ms. Helen Jones, Director, Global Engagement & Strategy, Science Museum Group, UK and several other dignitaries both from India and UK including a large number of students,  on the 18th of December at the Nehru Science Centre. One of the important features of the exhibition is that it has several original historical objects, which narrate the story of the raise and fall of penicillin and these objects have been beautifully blended in the thoughtfully curated exhibition. The exhibition also contains large number of models, which are interactive and completely engaging. An artistically created giant model of a Superbug - made of a large number of hyper sized medicine pills - antibiotics, injectables, microbes etc. welcomes the visitors to foretell what the consequences of superbugs could be for humankind, if timely interventions are not made. An antique-looking telephone earpiece, belonging to Fleming’s era, when picked from its cradle, plays out the original voice of Alexander Fleming, where he prophetically talks of the problems of antibiotic resistance. 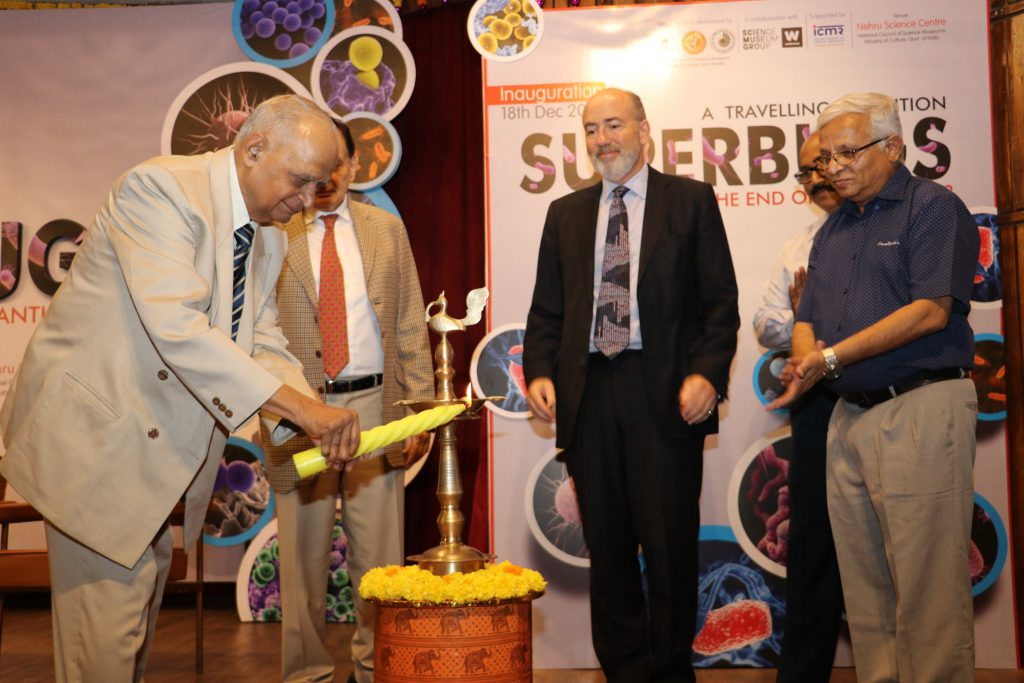 The Superbugs exhibition has been divided into three sections: Microscopic, Human and Global. Microscopic Section explores the hidden world of bacteria. Be it their size or characteristics, evolution of superbugs or history of antibiotics; the exhibits of this section will take you on a journey in which the visitor can zoom into the world of microbes, explore the touchscreen multimedia to understand how bacteria evolve into superbugs or flip a digital e-book to know the brief history of antibiotics. 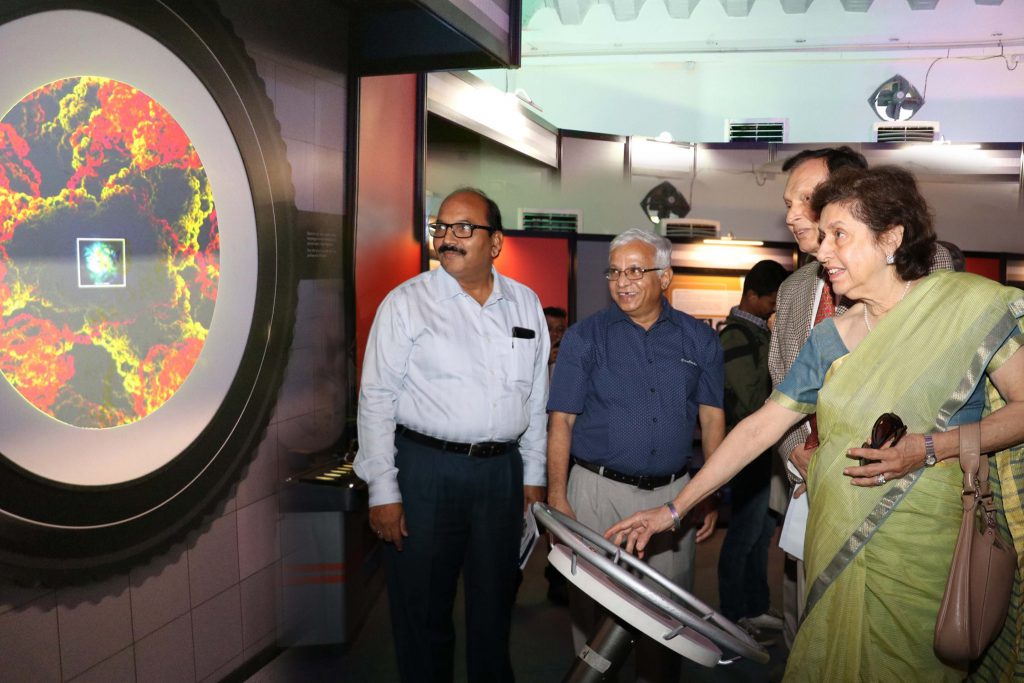 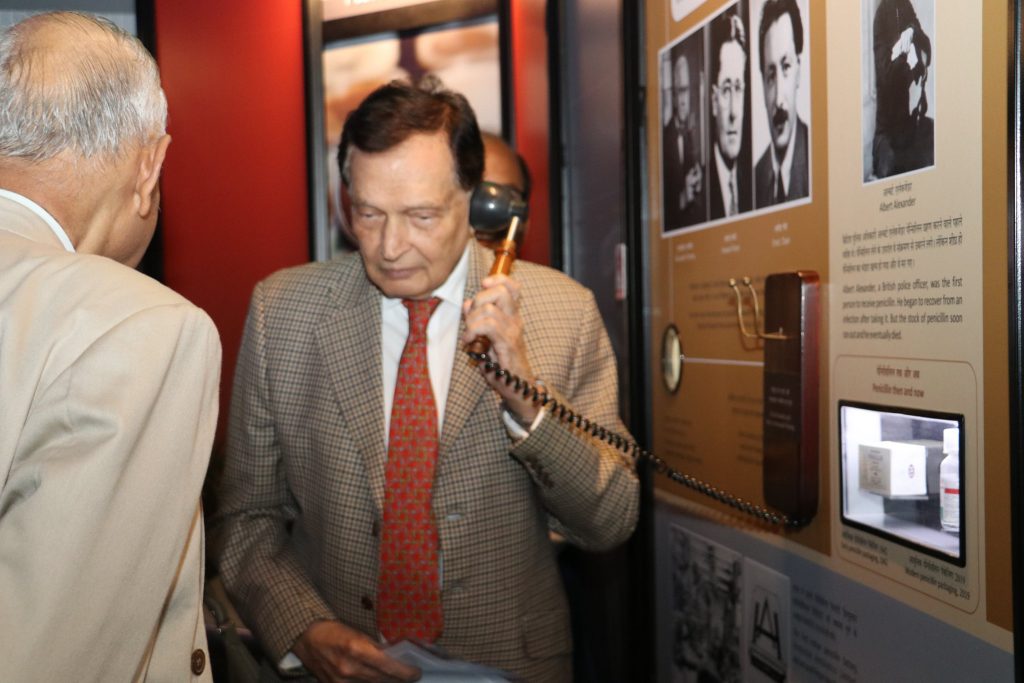 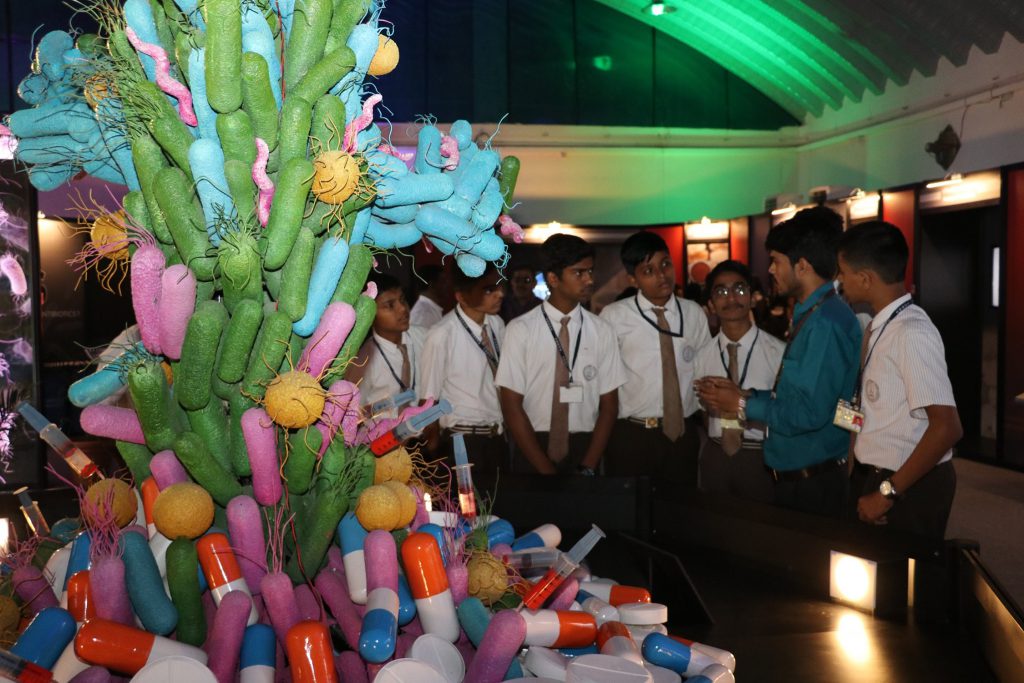 Alexander Fleming and his co-discoverers - Ernst Boris Chain and Sir Howard Walter Florey -  truly deserve the credit for their discovery of penicillin and other antibiotics. But their monumental discovery would have remained only in the laboratory shelf if not for the extraordinary contributions by other scientists and chemical engineers who helped translate their lab discovery into the development of deep tank fermentation which eventually turned out to be a game-changer. Unfortunately after serving humankind for several decades and saving millions of lives, this very wonder drug penicillin and antibiotics have now lost their potency largely due to human neglect and misuse. It is therefore time that we rethink on what has led us to this stage of helplessness and it is hoped that the Superbugs exhibition will help in creating that much-needed awareness on the proper use of the antibiotics and hope that the global community comes together once again to address this issue of Superbugs. It was science that saved millions and it is hoped that science clubbed with society will once again help the wonder drug antibiotics to claim that pinnacle position that it once had climbed.
Jai Vigyan.
Courtesy: https://khened.blogspot.com/

Great to know about this exhibition on superbugs. We the human race have always used our intellectual capability to enhance human life and to protect generations from disasters. The India Press wish you all the very best to progress further in this area

antibiotics have now lost their potency according to rdpi